Do you love to try international gastronomy? We also, therefore, could not resist talking about the most typical dishes of Peruvian cuisine , one of the best in the world, as we discussed earlier in the ranking of the best gastronomic destinations .

Peruvian food has a great raw material, with high quality local products , and even some that can only be found in Peru, as well as being varied, delicious, fresh and colorful.

And as from our point of view, the best way to get to know a culture is through its cuisine, whether you go to the country of Macchu Picchu on holiday, or if you want to innovate in your kitchen with Peruvian food recipes , or simply go to a restaurant to dine, we have made a list of the 10 traditional dishes that you should not miss :

Ceviche is undoubtedly its most international dish, known as Peruvian sushi, consisting of marinated fish or seafood , which is fresh, delicious, with a perfect texture, and an explosion of flavor on the palate. I can assure you that it is a Peruvian specialty that convinces even the most skeptical of raw fish, but I better explain how it is prepared, to see if it convinces you. 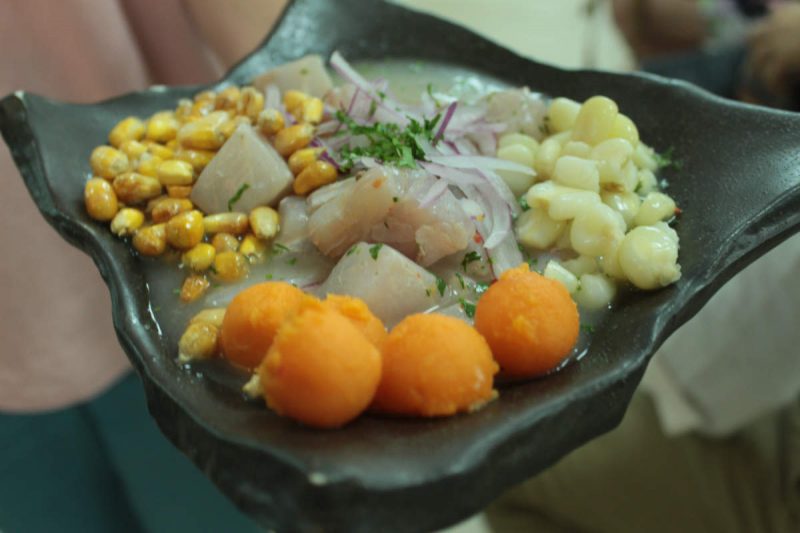 The main ingredient of this dish may vary, but it is common to use corvina, sole, hake, prawns or prawns . To start, dice the fish and wash it in cold water with red onion cut into strips. Then, we put it in a bowl with lime juice to be marinated, with chili pepper, a kind of pepper from the country a little spicy but with great flavor, in the absence of this you can use a fresh chili well chopped, and cilantro .

Everything is stirred so that it takes flavor, we pepper, and ready to serve accompanied by sweet potato and cooked corn, a large grain corn.

Go ahead and prepare it at home, how you see, it’s a healthy recipe, very simple and quick to make, that you will surely love. I resort to her many summer nights, and at dinners with guests I guarantee you will triumph.

Aíj de Gallina is a typical Creole dish , which has its origin in the mixture of Spanish and Quechua ingredients, giving rise to this tasty and comforting gastronomic specialty. 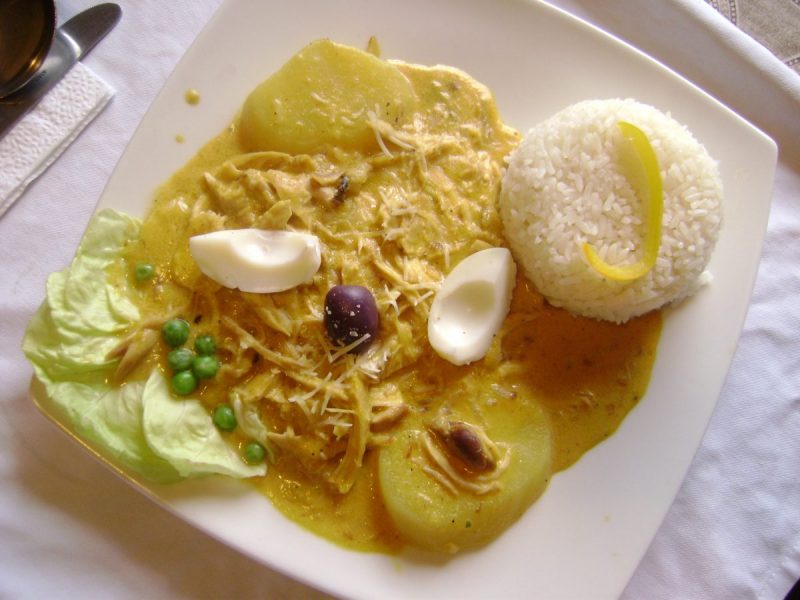 The traditional dish is cooked with chicken, although I must admit that if I prepare it at home I usually use chicken, which requires less cooking, and it is also very rich.

Brown the thighs of the chicken, and put them in a casserole with celery, leeks and onions, cover with water and boil until they are tender.

On the other hand, some slices of bread with evaporated milk are soaked, crushed and reserved, and in a frying pan, fry some garlic and chopped onions, to which yellow pepper paste is added.

You can easily find this pasta in stores specializing in Latin products, but you can also make homemade boiling hot peppers, Peruvian peppers, sugar, vinegar and oil and liquefy them before passing it through the colander.

Crumble the meat of the hen, and let it cook with the sauce so that it takes flavor, and ready to serve with some black olives and boiled egg.

The lomo saltado is a dish of beef tenderloin, which clearly shows the oriental influences of Peruvian culture, reminding us a lot of preparations in wok , although perhaps a little more elaborate. 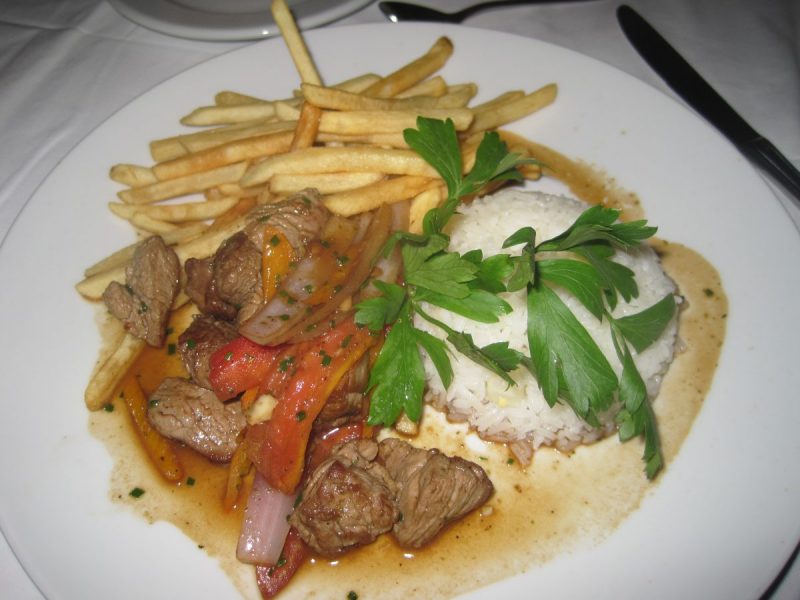 In a large skillet, the veal loins are sliced ​​and cooked in strips previously seasoned, add a teaspoon of cumin and sauté until golden brown, finally flaming with pisco, remove from heat and reserve.

Sauté onion also in strips, add some chopped tomatoes and meat, along with two tablespoons of white vinegar. We remove, put 4 tablespoons of soy sauce and sprinkle coriander on top. Continue sautéing until everything is at the point and is usually accompanied with chips.

The Peruvian yellow potato is exquisite, and very used in the Peruvian gastronomy, like for example the potato to the huancaína typical of the coast and the jungle, or the plate that we propose to you, causes stuffed, of which there are also many varieties filled with chicken, tuna and other ingredients. 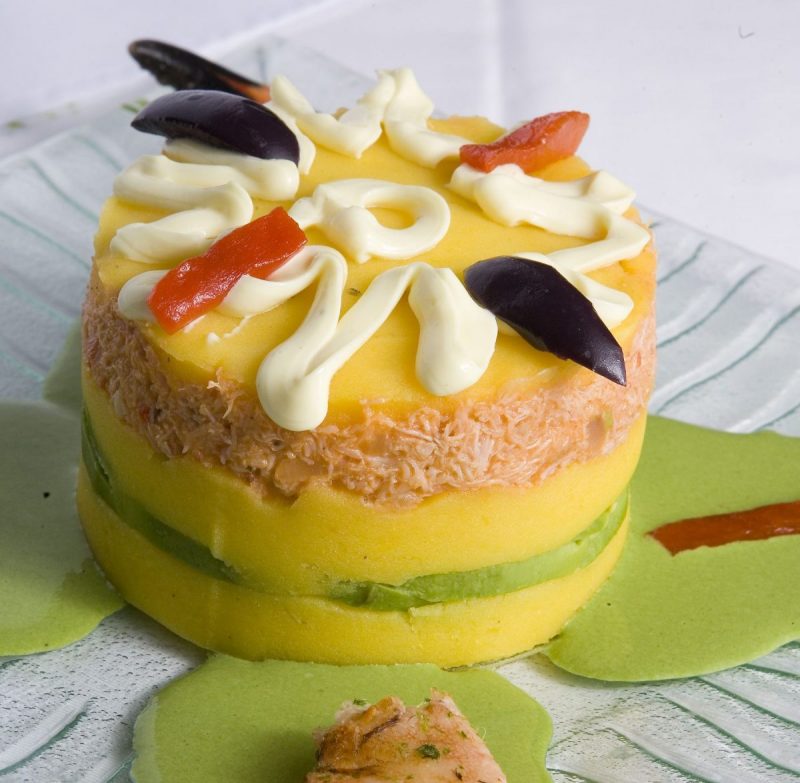 Cook potatoes lightly, peel and mash with a fork still hot. Once cold, mix with chopped chili, a couple of tablespoons of sunflower oil, the juice of a lime, salt and pepper, knead and divide into three parts.

The first part of the dough is placed on a base, we make a second layer with avocado cut into slices, salt and pepper, and on top of another part of the dough, the next layer is made with boiled and frayed chicken well mixed with mayonnaise , and we finish with the potato dough again.

Rocoto relleno is a healthy starter originally from Arequipa, and served in its famous picanterías, but which has spread throughout the country. Legend has it that this dish was invented by a man in the eighteenth century to satisfy the devil and thus get rid of the soul of his daughter who died very young, and he got it!

Rocoto is a kind of chili, with the appearance of fat red pepper, but with a different and less spicy flavor, so if we substitute it for these, although it will be rich, the flavor will vary.

The rocotos are emptied and boiled in salted water for three minutes to then change the water and repeat the operation. It is boiled a third time, this time with sugar water and we can worry about the filling.

Once stuffed they are placed in a dish with their lid, together with potato slices and fresh cheese on top, sprinkled with milk, put in the oven for 20 minutes, and ready to eat.

This dish is attributed to the African slaves who worked in the cotton plantations in colonial times, and took advantage of the leftovers of the vegetables to make this delicious dish. 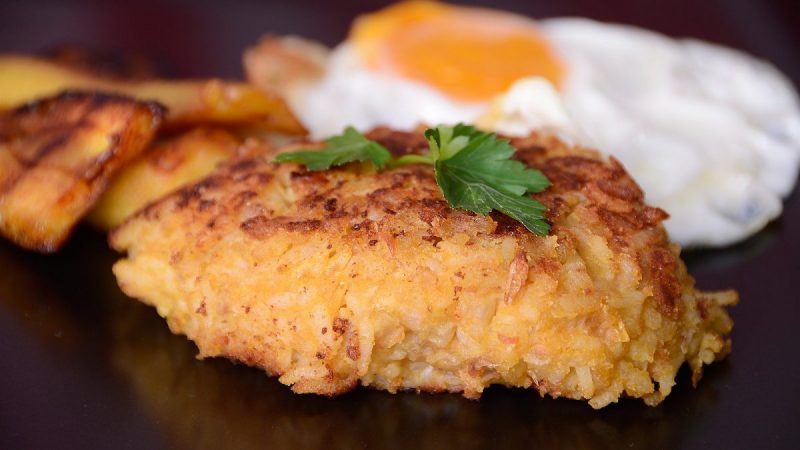 The first thing is to leave some black beans, lentils, chickpeas or any kind of legume all night soaking, then cook them in water and lard until they soften, and beat until there is a kind of lumpy mash.

In a pan brown some garlic and chopped onion, add chili paste, oregano, cumin and mix with cooked rice and mashed beans, all seasoned.

With this dough they make balls the size of a potato, which we then fry carefully, and serve with meat, eggs and fried plantain.

The anticuchos are skewers of meat or heart of grilled veal, heritage of the African population of which we have just spoken, and that are present at all family gatherings. 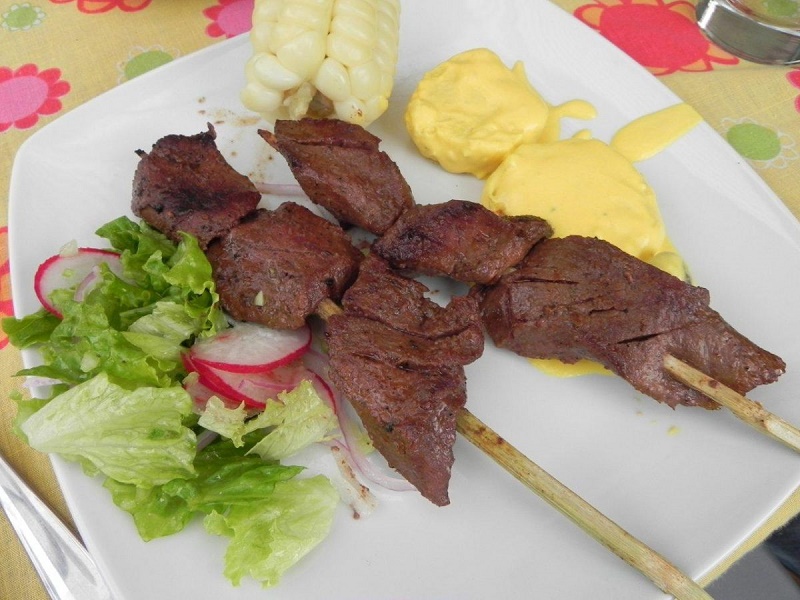 To prepare the anticuchos we only have to marinate the meat in pieces with salt, pepper, cumin, chili and vinegar, which is left to marinate for a few hours in the fridge, inserted in a skewer and made to barbecue.

The chicharrón sanguche is Peru’s quintessential meat sandwich, and you will find it everywhere, so if you travel to the country you will have many opportunities to try it.

Cook strips of bacon with water, salt, sugar, achiote , garlic, soy sauce and onion, drain and fry in a pan, to put it in the bread with chopped onion and rocoto and previously marinated with lemon juice, vinegar, cilantro and salt.

Finally, we have chosen two dishes that are more difficult to reproduce in your kitchens, because they carry typical ingredients from Peru, which are difficult to find or replace, but you have to try:

This dish typical of the Peruvian highlands is a delight, as well as a pre-Columbian recipe dating back to 4,500 BC that still lives on. 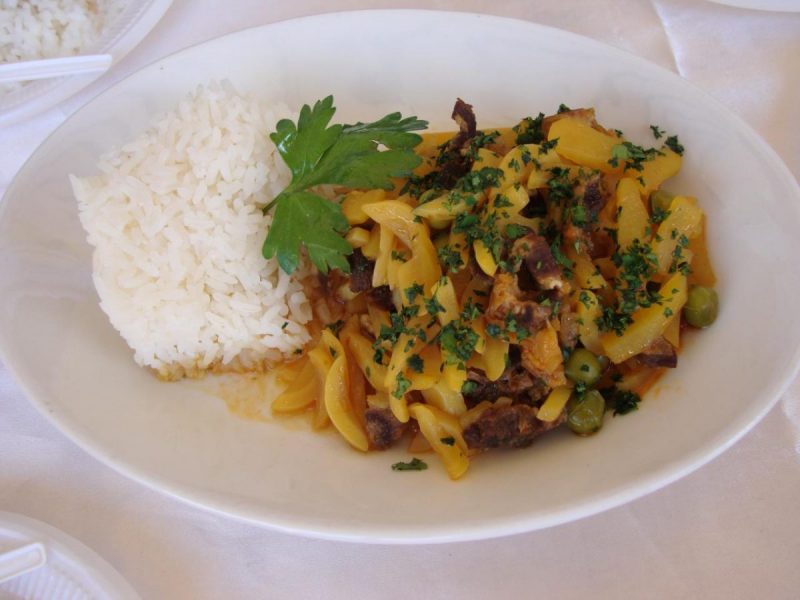 The olluco is a variety of potato that grows in the country, and the charqui, dry llama meat or alpahaca, spiced with parsley, cilantro, chili, cumin and onion.

The guinea pig is an animal similar to the guinea pig, and its meat with many proteins, omega 3 and very little fat is prepared in different ways throughout Peru, resulting healthy and delicious. 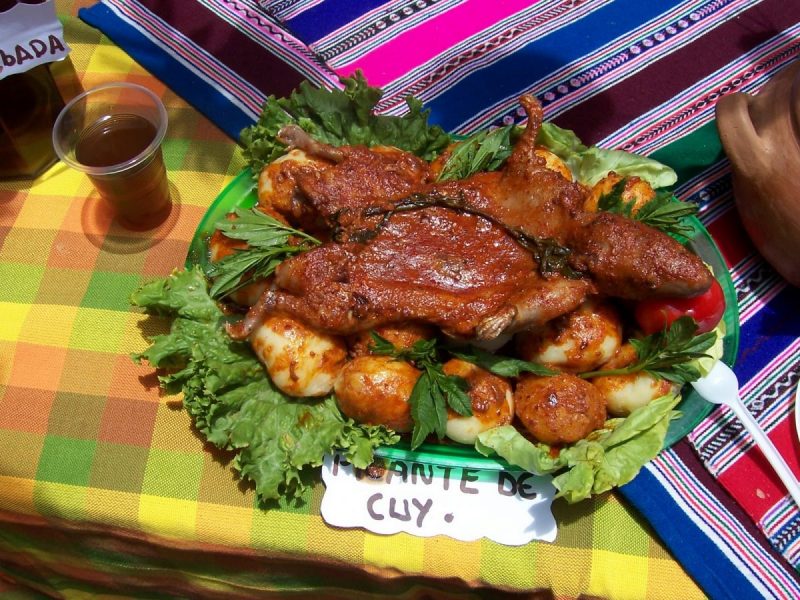 The original recipe comes from the Andean region, and it is stewed with meat broth, cumin, garlic, pepper, chili and peanuts.