In the early 1980’s it seemed that a new sexual disease had simply come out of nowhere. At first it seemed limited to the Male homosexual community and intravenous drug users and was, quite wrongly, dismissed by most media outlets and even the Government. However, it soon became clear that heterosexuals were at risk and then the Government decided to move to action and began a poster and ad campaign to raise awareness off the illness known as HIV/AIDs. They had a huge amount of misconceptions to combat before they had even begun. To be clear it is real and should always be of a concern to anyone. Visit www.checkurself.org.uk/plus/home_sti_kits/ who offer an STI test London way  if you have any doubts.

The media, especially the tabloid press were stuck by fear and panic. Remembering that the  first rule of the press is to sell more of their product they began to print ridiculous suggestions (at times in Banner headlines) that you could contract AIDS (totally bypassing the HIV stage, which is biologically impossible) by using a toilet seat and infected person had used or a door handle. If the virus was that virulent it would wipe humanity out within years. It did prompt some writers to speculate that the disease was an extinction event. When you also consider that it was thought to be caused originally by someone having sex with a chimpanzee. 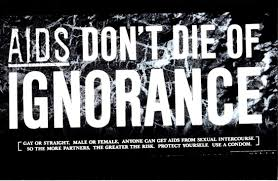 The belief is that HIV has been present in Western society since the early 1960’s and may have been due to the consumption of a chimpanzee as a food source. It wasn’t until the 1980’s that AIDS, a deficiency in the immune system was causing deaths certainly in the Gay community more than outside of it. This gave rise to a panic as people were immediately feed the wrong information even when the existence of the virus had been known for some time. The most popular nonsense was, and still is to some degree, the following.

You can get it by shaking someone’s hand. Clearly not. It is blood to blood transferable disease. This includes hugging as well. You can use the same toilet seat and drink from the same cup.

You can get it when someone with it cough’s on you. Again no, it is not transmitted through the air.

You can tell if someone’s got it. No. This was partly influenced by the film Philadelphia when Tom Hanks character had lesions. There are no outward signs that some has HIV or AIDS.

If in any doubt seek the advice from the link above.