The failure of many city centre offices in Glasgow to re-open, as the Covid-19 crisis continues, is a major cause of concern to other businesses in the city, says Glasgow Chamber of Commerce. 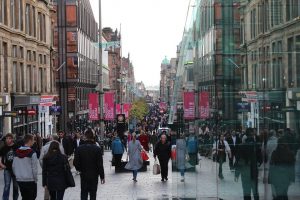 Shops, cafes, bars and restaurants have been the businesses which have been hit worst by the dramatic drop in footfall across the city, and there are fears that the service and hospitality sectors will face substantial challenges in the coming months.

In Glasgow 30,000 workers are employed in city centre hospitality and retail outlets. The arts and accommodation sectors have also been hit hard as the number of tourists has dropped dramatically.
Further bad news has emerged recently with suggestions that many office workers will not return to their workplace until next year.

One sector which may have benefited, strangely enough, is office supplies. Many companies whose workers are doing their jobs remotely have had to provide them with workstations and an operator chair such as those found at operator chair.

The crisis in other areas of the economy is expected to continue into next year affecting the estimated 217,000 people who have been furloughed since the outbreak of the pandemic. Officials in the region fear that many of that number will not return to work, and see their jobs disappear.

The Chamber of Commerce describes the short-term prospects as “deeply concerning” for businesses that rely on office-based workers’ spending power.

A spokesperson for the Chamber said employers were putting the health of their workers first and encouraging working from home rather than returning to city centre offices, not only in Glasgow, but also in other Scottish cities.

There has now been a call for the Scottish Government to act and set up a task force to deal with the issue in city centres across the country, and help support local initiatives such as that from Glasgow Life which is trying to encourage people to support their local businesses and help them through the crisis.

Local business groups are calling for a new package of support from Holyrood involving grants and loans, and help for those under the threat of redundancy. They are also demanding that the government should help businesses re-open by paying for the extra measures relating to cleaning premises and social distancing signage.

It is thought this would involve the government making a significant addition to current resources.