In this day and age of troubled times we British really shouldn’t worry too much.  If things start to go very bad we can rest assured that when King Arthur Pendragon turns up wielding Excalibur atop his mighty steed Lamrei then we are definitely looking at some tricky times; especially as he’s only supposed to turn up when Britain is under extreme difficulties. He didn’t bother turning up for the two World Wars, when the Armada was sailing up the channel or when William the Conqueror decided to invade so we can be sure that if he is woken from his slumber then we’d better get everything tidy for him and get our affairs in order. Many people and places have been named after the royal family much like a Swansea skip hire company that has taken the Pendragon name. 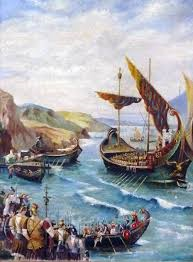 Who is King Arthur? That is a question that has been asked time and time again. The distinct lack of archaeological and written evidence, from the actual time he is supposed to have existed, suggests that he is nothing but a myth. Arthur is little more than a fanciful creation from the early middle ages; trying to remember a golden time that never really existed. Nennius and Geoffrey of Monmouth were looking for best sellers and not the truth. Arthur, if he was real, is thought to be ruler in the time of the Dark Ages. It’s called the Dark Ages mainly because we know next to nothing about it. Until the Anglo-Saxons established power and began to write things down we only have limited archaeological finds and even then that’s sketchy.

The Roman legions left Britain between three hundred and eighty to four hundred AD. This we do know because they wrote things down. They told the local Britain’s who were living the Empire life that defending Rome was more important and they’d have to look to their own defences. The first thing they did was ask the Saxon, Angle and Jute pirates to defend the coast rather than attack it and they agreed as long as they could settle. Originally it was thought that there was then a state of constant war between the Britons and Saxons etc with Arthur as a leader that was able to stem and even turn the tide.

It turns out this might not be true. It’s more likely that the two merged to together and began to create the Anglo-Saxon English. Skills like engineering and writing were lost once the Roman influence was gone and food production and defence was more of a priority. The myth of Arthur still persists though, there may yet be that piece of evidence under the earth that is just awaiting discovery.