These words from the famous, iconic 1969 song, composed by Peter Schilling and sang by David Bowie was written as a fictional story about an Astronaut who goes into space only to discover that the World, he has left behind is doomed!  Originally part of a promotional film” Love You Till Tuesday” the song as we all remember it was released in 1982 and reached number one in Austria and Germany. 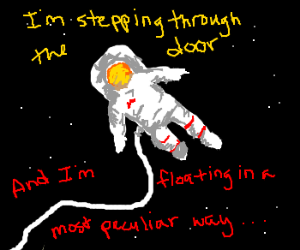 NASA the actual American space fleet have compiled an extensive list of jukebox songs that are connected to flight, Astronauts and space.  From “I Don’t Want to Live on the Moon” sung by Ernie of The Sesame Street crew, to “Fly Me to the Moon” by Frank Sinatra and “Walking on the Moon” sung by The Police.  The Rolling Stones song “2000 Light Years from home” and the very funny “Galaxy Song” by Eric Idle/Monty Python along with Snow Patrols “The Planets bend Between Us” are all on the list.

Any specially trained space astronaut or Captain of a commercial or private aircraft would want to be safe, secure, comfortable and in control.  Each one of these brave heroes and heroines would want to sit in a Large range of operator chairs provided by probably one of the most trustworthy suppliers there is. Let’s keep our Pilots and Astronauts safe, secure and comfortable, so that their flight experiences are like sitting at home in their favourite operator chair.